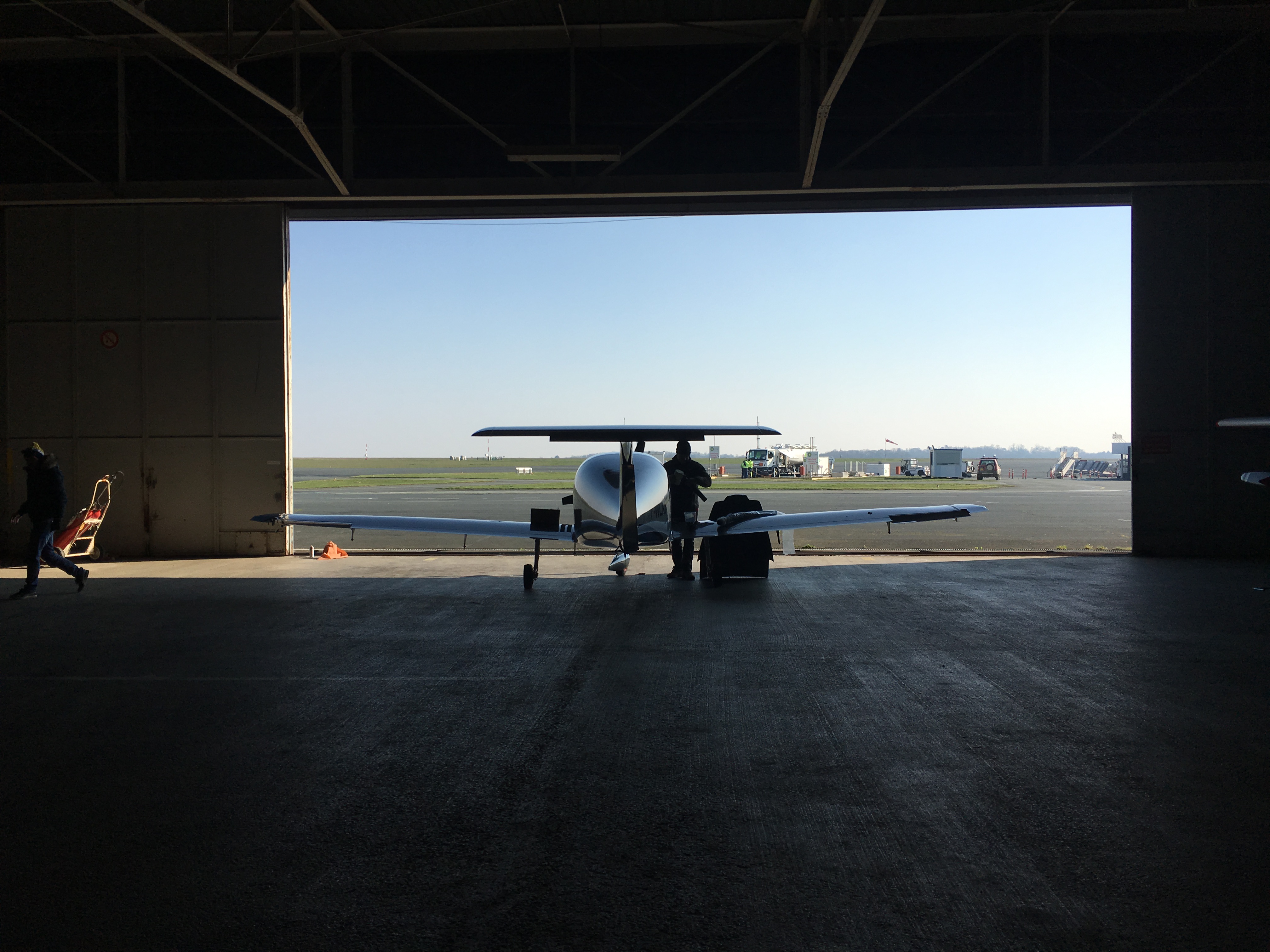 Certification work, flutter tests, structural tests, modifications of engine cowlings, rudder pedals, aileron rods, painting, upholestry... The past months have been busy, but we took the Elixir to the air again on Wednesday, March 21! Story:

Last Thursday, March 15th, the Elixir was back at La Rochelle airport. As in the summer of 2017, our plane has found its place in the large blue hangar of the CCI. Nothing has changed except the temperature, the whole team is currently working between -2°C and 10°C, it was snowing on Monday! In the program for the end of March, some development flights will allow to study in depth the flight envelope. We are now allowed to fly up to 288km/h!

The aircraft arrived by road at the airport, the wing on one side, the fuselage on the other. 1h30 later, Maxime and Quentin have assembled the Elixir.
Then comes the ballet of preparation. Reconnection of control systems and instruments, verification of all fastenings, various adjustments, installation and calibration of data acquisition instrumentation, engine tests...
3 days after our arrival the plane is ready to take off. The team is looking forward to the arrival of Jean and Didier, our flight test engineer and test pilot.

Once our champions arrived, the ballet around Elixir resumes. Presentation of the evolutions, re-re-verification of all the elements and preparation of the missions. After 6 months away from the runways, our objective is to continue the exploration of the flight domain thanks to our new EASA authorizations. Not being subject to flutter, our plane is authorized to fly up to 288km/h.

Finally arrives the first excursion on the runway! After a little delay (the good weather having attracted many planes on the platform) the controller gives the authorization to engage the Elixir for careful tests of increasingly faster taxiing. First of all we want to validate the new rudder system. Acceleration... foot to left..., foot to right... All clear. So far, it's perfect! The Elixir finishes this first excursion by supporting the small jumps Didier makes him undergo. We're good for the flight.

After a quick debriefing, the team gets back to work. In the next test we'll fly! There is much less traffic, but the wind is omnipresent, between 15 and 20 kts at 45° from the axis. Didier aligns himself on runway 27 and takes off, the Elixir disappears on the horizon while flying over the bridge of the Ile de Ré. It's Jean's turn to come in. Our flight test engineer imposes a sustained rhythm to Didier and the Elixir, the manoeuvres follow each other in order to profit of every minute. Behaviour on the 3 axis, temperature verification at different speeds, evolution with the flaps... Adjustments are necessary. During the day we performed two flights of 30 and 45 minutes each and worked on the aircraft during idle times and in the evening... late. During the last flight, Didier notices a change in the Elixir's pitch behaviour, it is no longer as stable. As soon as we return to the ground, we discover that one of the Mylar sealing strips between the horizontal tail and the tab was lost.

The next day, Thursday, March 22nd, third flight, during nearly one hour the evolutions follow one another. Overall without any issue. The test program established by Jean foresees for the end of this flight low speed evolutions for each flap position. For the first and second positions, everything's fine. For the 3rd one (45°), while the plane flies a little less than 85km/h, it makes an unexpected dive. After putting the plane back in line, Didier immediately notices that the depth is not as stable as before. Back on the ground, we see once again that one of the Mylar bands has come off. Cause or consequence?!? We need to investigate.

However, after two days of testing, we can conclude on a very positive note. The winter improvements have largely paid off: no more friction and heaviness on the aileron chain and on the steering chain (front and steering). We don't have any more vibration on the front landing gear during fast taxi, and the maneuverability on the ground is very pleasant. The cooling problems are largely solved. Stall speed approaches appear to confirm the calculations. And the new exhaust meets our expectations in performance and sound!

The plane will now return to our workshop for a while. The team will analyze the massive data recovered during these 2 days, check the plane in detail and work on some improvements:

The Elixir's next flight is not yet scheduled, but we will be sure to keep you informed!

Hurry up to pre-order (with no obligation), deliveries for 2018 are already fully booked!

To pre-order it's HERE!